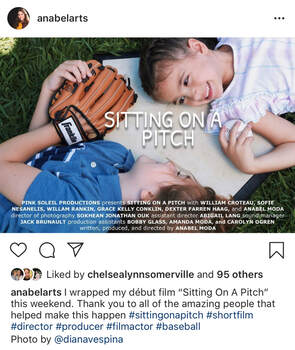 BOSTON, MA - For the third year in a row, high school student Anabel Moda helped raise money for the charity Cradles to Crayons. A tradition that started in 2015, Moda creates holiday CDs and MP3s each Christmas season to sell and donate 100% of the funding to the charity.​ Every year, she sets a goal to donate $1000 to help kids in need, this year exceeding that goal yet again within a time period of just a few weeks. On February 10 of 2018, Moda presented the check to the organization at their Boston location.
December, 19, 2017

WAKE UP CALL FROM 'A CHRISTMAS CAROL'

BOSTON, MA - Once again, Anabel Moda, a fourteen year old Reading middle school student set out to help her favorite charity; Cradles to Crayons. In December of 2015, through the sale of CDs and MP3 of her vocal takes to popular Christmas songs, she was able to raise $1000 for the Boston based charity.  With people always in need, Anabel was intent on helping again this past holiday season. “I was determined to beat my previous donation because I saw what a difference last year made to the children that depend on this charity."  Recording the songs over Thanksgiving weekend gave her a 4 week window to meet her goal.  It came down to the wire, but this year she raised $1023 which she presented to the organization at their yearly MLK Day of Service event. "My whole family came with me and donated time helping and we presented the check to leadership at the charity. It was very rewarding."
January, 22, 2016

READING, MA - Anabel Moda, a student at the Coolidge Middle School, embarked on a fundraising effort this past December with the hope to raise money for children in need. She chose Boston based charity Cradles to Crayons which provides children from birth through age twelve, living in homeless or low-income situations, with the essential items they need to thrive - at home, at school, and at play. The charity supplies these items free of charge by engaging and connecting communities that have with communities that need. Moda researched many charities, but was drawn to this one because of it's focus on children and the totality of their offering. “I was excited by the fact that they do not only give things like shoes and warm clothes, but also supplies to help them in school. They supply paint, paper, and things that let the kids be creative, which helps them feel better about themselves”.

The thirteen year old used her talent by recording three popular Christmas songs and selling compact discs, as well as MP3 downloads, in order to make a difference this past holiday season. "I figured that instead of just asking for donations, I could create something that I could sell”, stated the seventh grader. With the help of her father, Anabel recorded the songs in late November and had product ready 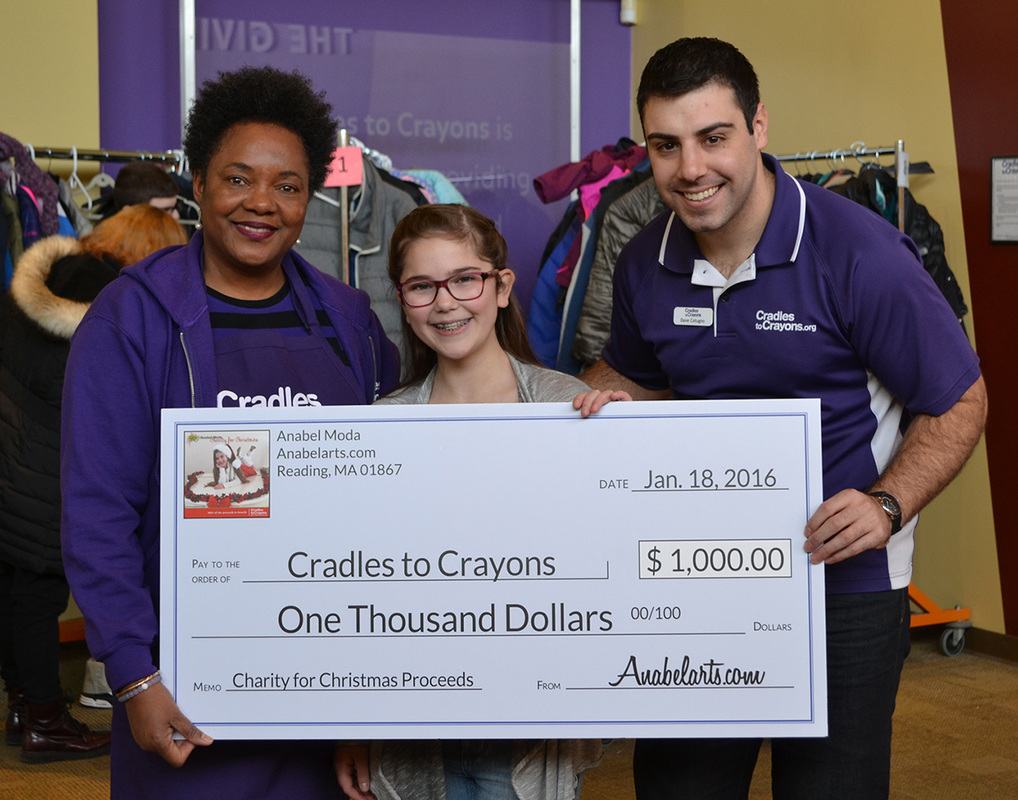 Photo:  (L to R) Sharon Reilly, Executive Director, Anabel Moda of Reading and Dave Cotugno, Senior Manager of Family Philanthropy
for distribution on December 14th. Together they produced the music, created the art, and manufactured the CDs. Sales of the music consisted of a combination of door-to-door, as well as placement on her website anabelarts.com. “I basically walked from house to house in all the neighborhoods around where I live”, Anabel commented. She also added “Not only did people buy the music but some also donated a little extra because of the charity". Anabel fulfilled the orders on foot and by mail and 100% of the gross sales went to the Charity. Her initial goal was $500 but was able to double that, raising $1000 dollars in total for her 4 week effort.
On January 18th, Anabel and her family participated in Cradles to Crayons' MLK Day of Service event held at their Brighton facility. There, they presented the check to Sharon Reilly, Executive Director and Dave Cotugno, Senior Manager of Family Philanthropy. “It was amazing to see how the whole place worked. Everything was so organized. From the clothes, to the books, to the toys”, said Anabel. “We helped for a couple of hours by quality checking clothes that will eventually find their way to a child in a Massachusetts community. It was really rewarding.”  So impressed with her visit, Anabel is now looking forward to participating in the Youth Leadership Program at the organization.

Last year, Cradles to Crayons provided, free of charge, packages of clothes, shoes, books, toys, baby safety equipment, and school supplies to 87,000 children in Massachusetts and the Philadelphia area. Working in close partnership with social workers, nurses, teachers, and therapists, Cradles to Crayons has become a trusted resource: to children and families in need; to the organizations who serve those families; and to families, corporations, and individuals who seek ways to make a tangible difference in their own communities. For more information on the charity visit cradlestocrayons.org.